I have been trying to whiten my teeth with these trays my dentist gave me, but it is aggravating my TMJ Disorder. I recently read about the Tanda Pearl System, which only requires five minutes of use at a time, only twice a day. Do you know anything about this system? Is it really safe and effective? 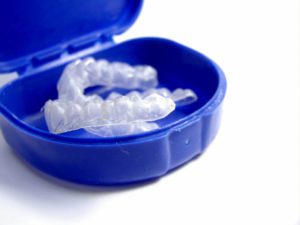 After looking this over, I would say there is nothing here that could be considered a new discovery that changes the face of teeth whitening. It whitens your teeth using bleaching gel. It’s not stronger than anything else. I do have some concerns that could actually make it weaker. First, the trays. These are not the custom fitted trays your dentist should have provided for you. As a result, it is going to cause a few problems.

Problem one is leakage. This goes two ways. The saliva can leak into your trays which weakens the effectiveness of the gel. Plus, the whitening gel can leak out, which both lessens the amount of gel that gets to your teeth as well as puts your gums at risk.

Another problem is the structure of the trays. As you can see from the image above, there are separate trays, one for each arch of your teeth. Tanda Pearl is only a single tray which means to keep it in, you will have to bite down on it for the entire five minutes you wear it. This will aggravate your TMJ Disorder way more than what you are experiencing now.

My recommendation is two-fold. First, make sure your dentist gave you custom-fitted trays. Let him know they are causing some jaw pain. There may be something he can do with the trays. If they are custom-fitted correctly, you can just lower the amount of time you wear the trays. If you want to wear them for 5 minutes a couple of times a day, do so. There is nothing magic about the number. The more access the gel has to your teeth, the whiter they get, but you can take as long as you want to do that.